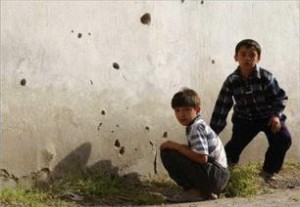 OYANNEWS: Today the armed forces of Armenia fired a secondary school in Gapanly village of the Terter region of Azerbaijan.

1news.az correspondent in Karabakh reported that Armenians fired at the school during studies. The children were immediately evacuated, no casualties are reported. There are traces of shooting on the school walls.

The Defence Ministry of Azerbaijan describe the situation on the front line as deteriorated.

Earlier, Azerbaijani air forces flied over the contact line of troops. Sources in the Azerbaijani Ministry of Defence noted that the air flight was a planned action.

The situation is worsening amid continuing diplomatic efforts of the parties to agree with the mediation of the OSCE Minsk Group.