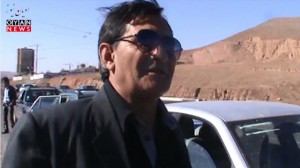 Dedicated to Oyan news : Asadollah Asadi Dagdagan, doctor and Azerbaijanis political prisoner, whom has been sentenced to 10 years of prison, is still in Tehran’s “ Evin” prison without any basic rights of prisoners and he is kept there in a acute health condition.

According to Oyan news’ reporter’s report, on 14 July of 2010 Asadollah Asadi Dagdagan, Azerbaijanis doctor was arrested by security officers in Tabriz. After 5 months of imprisonment in solitary condition in ministry of intelligence’s detention in Tabriz was transferred to Tehran and spent 4 months in solitary condition in 240 and 209 sections of Evin prison. For the charge of cooperation with the invader countries and also being a member of “khalqe mosalman“ party, was sentenced to 10 years of imprisonment by 15-th branch of revolutionary court of Tehran with the presidency of judge Salavati .

He was also charged before with the charge of membership in “khalqe Mosalman“ party.

According to the reports of the “Kalame” News website , during more than 180 sessions of investigations in Tabriz in ministry of intelligence’s detention was exposed to several kinds of torture, in a way that because of boot kicks on his head and belly was stricken to sever kidney problems , and for being kept too long in darkness almost lost his eyesight and hard kicks caused bleeding in his urinary system . he was exposed to treats like execution, being thrown in the wastewater pit , being buried alive and forcing this prisoners head in toilet. all these has caused sever mental problems and depression in this unknown political prisoner of Azerbaijan.

He had been forced for 5 days to stand up without letting him to lean over the wall or sit. This is another one of physical tortures that had affected his soul and body so bad and deeply.

Because of high mental pressures that was caused by brutal tortures on him and being kept in Limbo (uncertainty ) for 20 months, Asadollah Asadi dagdagan committed suicide on 11 march, 2012 . But vigilance and fast reaction of prisoners of section 350 of prison has saved him from death. His conditions severity, specially his eyesight is in a level that according to website of democracy and human rights activists his breadth of vision has decreased to less than one meter, and is in urgent need of surgery.

He is suffering from severe stomach and duodenum diseases and according to the medical staff of Evin he should be transferred as soon as possible to a hospital and start his treatment. But authorities of Evin prison has rejected his request for being treated by a specialist doctor severally.

On 16 of November 2012 , as an objection to the discordance of Evin prisons authorities to his request of medical permission for treatment, he started hunger strike. During these 3 years has been banned from the very basic rights of a prisoner including the rights to make calls, personal meetings, meeting his wife, leaving permission and the right to be treated by a specialist doctor.

According to the provision 213 of prison Regulations the authorities are obliged to release leaving permission in the case of the marriage or death of any of family members or close relatives for 1 week. The father in law of Asadollah Asadi

, Asgar Khorammi and his aunt leyla Asadi along with his 2 kids and one grandchild died in the “Qaradag” earthquake. Although his close relatives died, the authorities of prison rejected to grant his leaving permission. The judicial authorities also rejected his request for being transferred to the prison of his hometown.

Asadollah Asadi was hired by the ministry of education and in 1993 managed to graduate in medicine. Although he got this extra degree he was unable to be upgraded and by the protection and security center of ministry of education was rejected for not being qualified. He has been told that his selection for the case of being related to “khalqe mosalman“ needs more consideration.