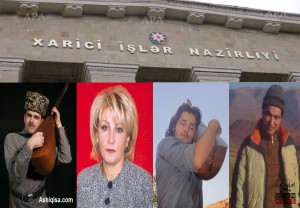 Oyannews : According to news, delivered by Iran based sources, an Azerbaijani citizen, a scientific worker of the Turkish People`s Literature section at the Institute of Literature of the National Academy of Sciences of Azerbaijan and a member of Azerbaijan Journalists Union Khalide Khalid was arrested by Iranian special services – ETTELAAT in the city of Tabriz on April 30, 2013.

As told Iran based news sources, Ms. Khalide Khalid was invited to Iran to take part in an event related to literature and culture. She and other six activists were arrested while being at home of inviting person of Iranian decent Okhtay Rashidi`s father. The Iranian ETTELAAT employees searched the home and confiscated a laptop, literature and other belongings of Khalide Khalid and others.

Whereabouts of Khalide Khalid and others is not known yet.

The CASCFEN knowing that the Iranian clerical mullah regime usually uses pretexts to press on Azerbaijani citizens and Azerbaijanis with Iranian citizenship calls on the world community to act as immediately as possible to free Khalide Khalid and others.

This is not a first case while Iranian regime arrests Azerbaijani writers. A year ago

, two citizens of the Republic of Azerbaijan, young poets Farid Huseyn and Shahriyar Hajizade (del Gherani) were invited by Iranian side to city of Tabriz to take part in an event dedicated to poetry as well. They traveled to Tabriz on April 29, 2012. After 4 days of being there they were detained by Iranian intelligence service – ETTELAAT agents on May 3, 2012 and accused on “narcotic transportation”. A bit later, they were accused of “spying for Israel”. But after continues pressure by international organizations and Azerbaijani government both of them had to be freed.