Iran : 7 Azerbaijanis activists’ objection letter to the judicial authorities/ severe torture of these activists in the Intelligence Detention Center 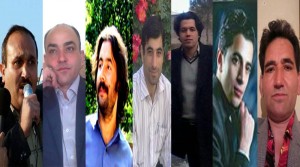 OyanNews: seven Azerbaijanis activists have written a letter to the judicial authorities and objected the behavior of security forces.

Based on Oyannews reporter, Abbas Lesani, Saleh Mollaabbasi, Ebrahim Rashidi, Ebrahim Nuri, Behzad Abdi, Akbar Abolzade and Abbas Nazari have written an objection letter about behavior of security forces and illegal transfer to the intelligence detention center and submitted it to prosecutor of  Ahar city.

As a part of this letter that a copy of it has been received to Oyannews it is written that:… with your judicial order we were transferred to an unknown detention center and we were harassed there…

“Vilification, kick, slap in the face, punch, blow to the head with batons, body Whip, slamming head into the wall” are examples of tortures by security forces that these Azerbaijanis activists have mentioned in this letter.

These activists also added that they have been forced to confess and sign it under a torture.

Moreover these Azerbaijanis activists requested experts to Ahar prison in order to investigate accuracy of their claims.

In this letter they emphasized that as an objection to the detention they refused to submit a bail and will continue their hunger strike until unconditional release from prison.

It is noteworthy that among the signatories of this letter, Behzad Abdi’s family submit a bail and he was released from Ahar prison.  Also among these arrestees, after converting their bails to Kefalat ( a document to be submitted by an individual who’s qualification is obvious to the court)  Meysam Jolani, Sajjad Jolani, Jafar Rostami Rad and Asgar Naderi today have been released on bail from Ahar prison.