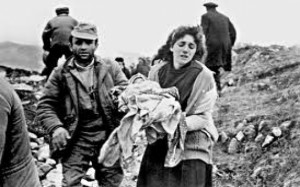 , also known as the Khojaly tragedy, was the killing of hundreds of ethnic Azerbaijani civilians from the town of Khojaly on 25–26 February 1992 by the Armenian and, partially, by CIS armed forces during the Nagorno-Karabakh War.

According to the Azerbaijani side, as well as Memorial Human Rights Center, Human Rights Watch and other international observers, the massacre was committed by the ethnic Armenian armed forces, reportedly with help of the Russian 366th Motor Rifle Regiment, apparently not acting on orders from the command. The death toll provided by Azerbaijani authorities is 613 civilians, including 106 women and 83 children. The event became the largest massacre in the course of Nagorno-Karabakh conflict.