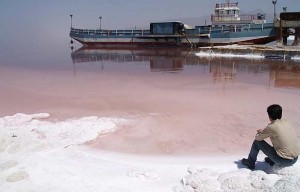 Oyannews: Water and environment experts have warned of significant health risks if Lake Urmia in northwestern Iran dries up.

Alireza Seyedqoreyshi, a specialist in water habitation at the Iranian Department of Environment in Western Azerbaijan recently stated, “If Lake Urmia dries up, it may give rise to many pulmonary and new diseases in the area.”

The lake was once the sixth largest salt water body in the world, and the largest lake in the Middle East. But the lake has shrunk in recent years due to bad management, including the development of a causeway and badly designed and executed dams and wells, both of which had an enormous impact on water flow.

Despite some government measures to improve the situation, Shahrvand newspaper reported that a “shadow” still hangs over the lake and the surrounding area, with experts predicting the lake will be completely desiccated in a matter of years. Though health officials have established links between diseases and the deterioration of the lake’s ecosystem, this new warning suggests an even greater threat to public health than previously thought. In particular, the rise in frequency of salt storms poses considerable risks, including respiratory diseases.

On his visit to a sustainable development site around Lake Urmia, Seyedqoreyshi told the press: “We have been witnessing an alarming change to the ecosystem of Lake Urmia as a result of poor management of water resources and a continuous decrease in rainfall, accompanied by a rise in temperature over the past 30 to 40 years. A serious drought began in the closing years of the 1990s, which, according to some experts, marked the beginning of the present crisis. The average inflow of water to this lake in the past 18 years was 2.4 billion cubic meters. However, in the past few years it has decreased to 300 million cubic meters, with a concomitant increase in agricultural land use in the area, thus reducing the inflow even more.”

Seyedqorehshi said if desiccation of the lake continued, the level of underground water will fall too. In addition, “its islands will connect as a result of deterioration, thus threatening wildlife as well.”

“The minimum ecologic water level of this lake is 1274 meters lower than the sea level. At the moment it is 346 meters. Fortunately, as the result of certain measures taken and a higher amount of rainfall, the water level did not change this year.”

Mohessen Soleymani Roozbahaee, the director of a protection project for Iranian lakes, also issued a warning: “Five million people are dependent on Urmia, and will gravely suffer if its collapse continues.”

“One of the main goals of sustainable development is to prepare the grounds for public participation in the revival of the lake,” Soleymani Roozbahaee said. “We are hoping to attract the participation of all local

, governmental and non-governmental organizations, as well as the private sector and international organizations. In the first stage of this project, successful efforts were made to involve 41 villages covering 30,000 hectares square meters of land and 13,000 farmers. In the second stage, the project intends to cover up to 74 villages, even though 30,000 hectares is insignificant when compared to 500,000 hectares of agricultural land in this region. Yet, it is better than nothing.”