South Azerbaijan and its energy security 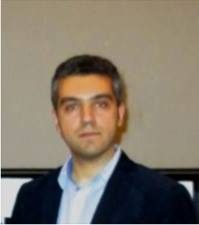 In accordance with International Energy Agency (IEA) the energy security refers to the uninterrupted availability of energy sources at an affordable price (1).

Increasing the energy security, undoubtedly, is among the main issues, which all states must observe elaborately. While fossil energies like oil, gas and coal play an important role to define the energy security; countries that are poor in such energy sources should focus on new types of energy, which are referred to “Renewable Energies”.

Evidently, the huge part of the primary energy use in the world consist of fossil fuels (figure 1), with 35% oil and liquid fuels, 23% natural gas and 26% coal, respectively (2). 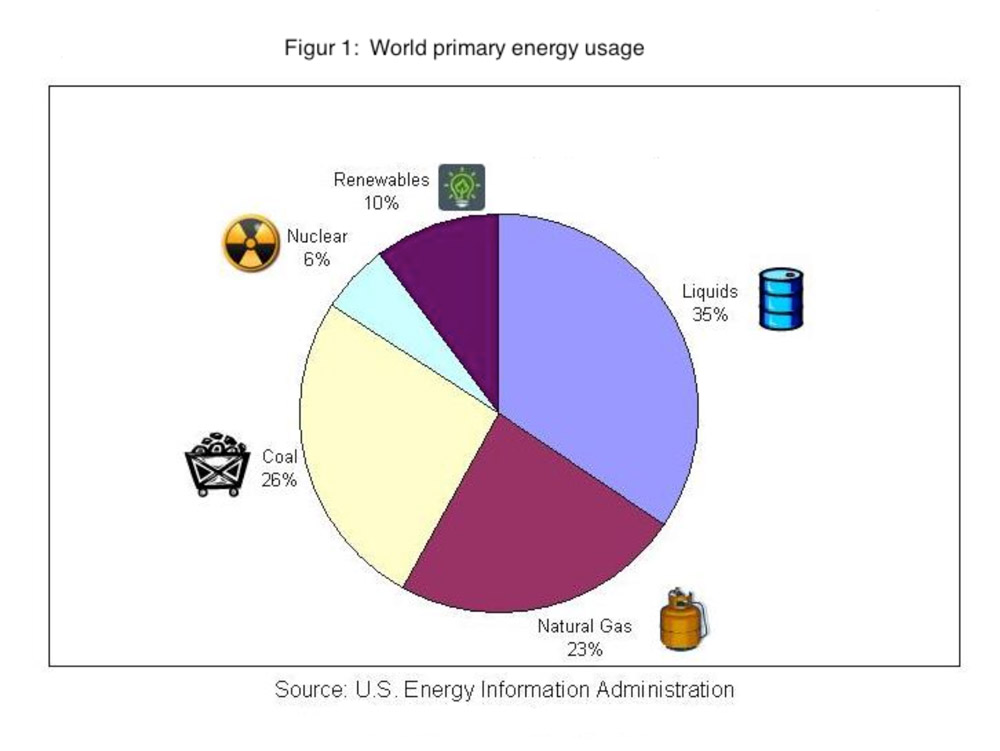 It shows that how all the countries regardless of their energy source origin are depend on traditional fossil fuels enormously. Question is, “Should we depend on these polluting and non-environment friendly energy sources?” and “How long must we negotiate with mostly rich and less democratic Middle Eastern countries like Iran or Saudi Arabia about the oil/gas prices and of course their administrative methods?”

The last political crises between Russia and Ukraine has been shown that all the countries which are poor in fossil energy resources should rethink again and again about the consumption of such energy sources. In this article we will address this issue for a region, which could be a potential future country, “South Azerbaijan”, in which it is located in northwestern Iran now.

As we mentioned above, the most important part of the world primary energy use is consist of fossil sources, which the huge part of the fossil reserves are located in Middle Eastern (figure 2) developing or under-developed countries (USA and Russia are exempted since they have the largest fossil energy usage per capita globally). However, regional or international conflicts or crises such as 1970 oil crises, can impact the fossil fuel prices anytime. 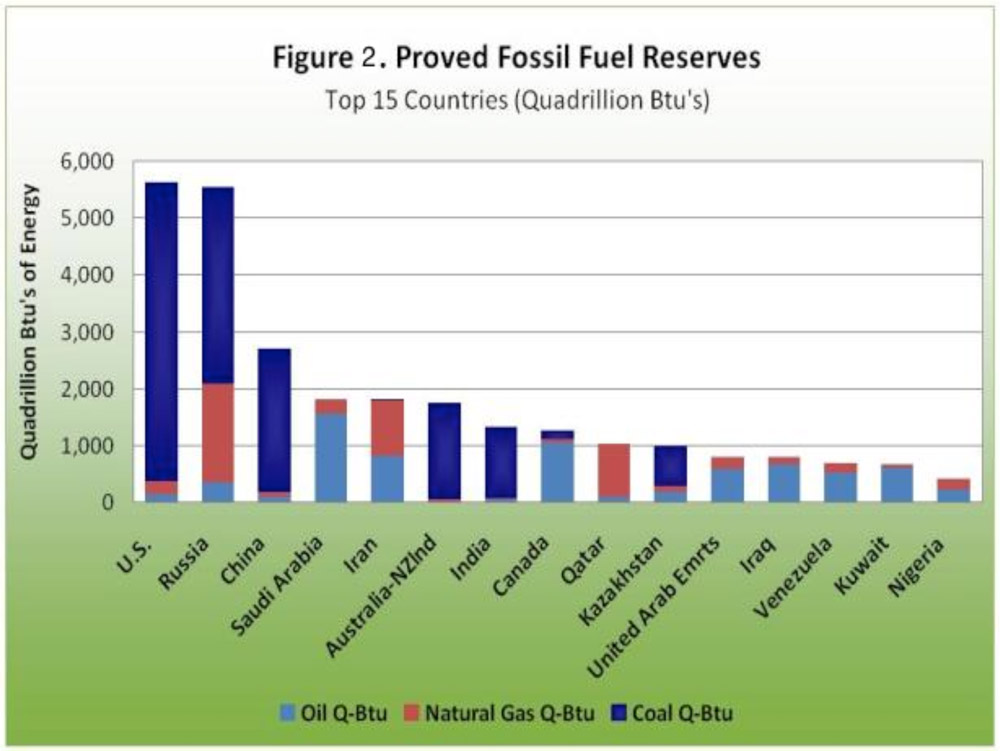 Figure 2: Proved fossil fuel reserves in top 15 countries. The USA with highest amount of coal reserve and Saudi Arabia with biggest oil reserves are shown in this diagram (3).

In addition, despite of low prices of those fuels, they are very contaminative and pollutant to the environment and produce huge amounts of greenhouse gasses like N2O and CO2, which are harmful to the atmosphere and trigger and increase global warming directly.

Due to the two important negative factors that mentioned above (non-environment friendly and high energy security risk because of dependency to unstable countries), the most of the developed countries especially in Europe were establishing more confident and reliable energy sources “Renewables”. While countries like Norway and Sweden use the benefits of renewable energy sources like hydropower, others like Germany, Spain, Turkey and Denmark have invested billions of dollars on solar power, photovoltaic, biomass, wind and ocean energy.

Norway with 42% renewable energy supply comes as a leader in Europe, since 37% out of 42% is made of hydropower. They plan to reach the remarkable amount of 67% of final energy from renewables by 2020. Also, Sweden as one of the most famous countries in clean energy production has a share of 32% of final energy from renewables, in which they plan to reach 50% by the end of 2020. Other main European countries like Germany, Spain, UK, Denmark and Turkey (figure 3) have a share of approximately 10 to 25% renewables totally out of their final primary energy (4). 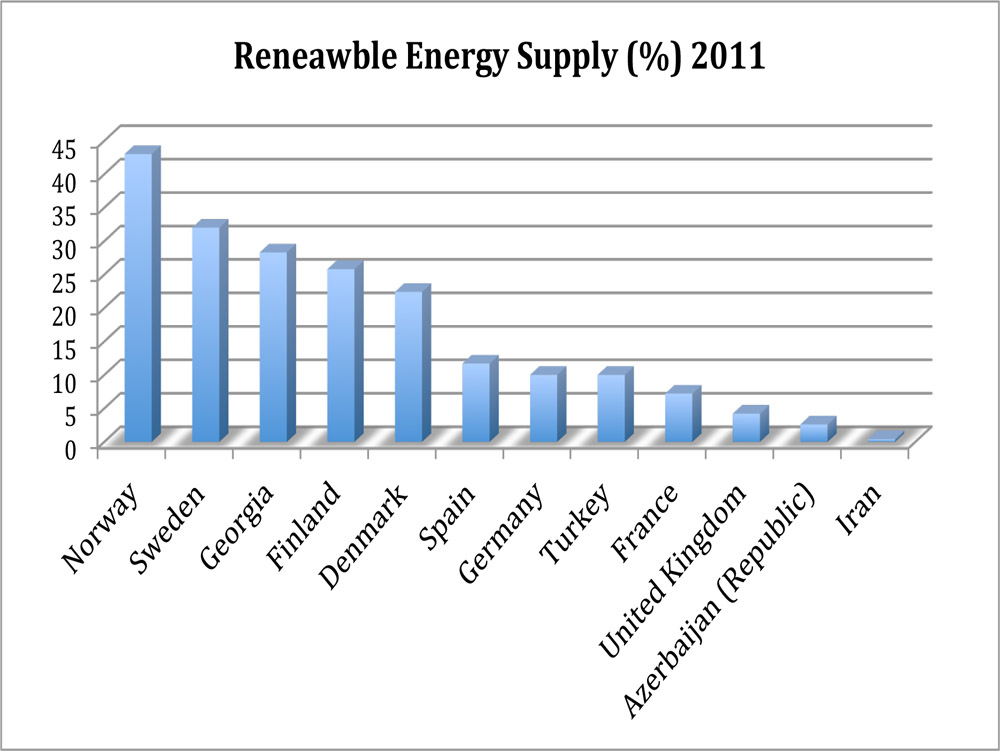 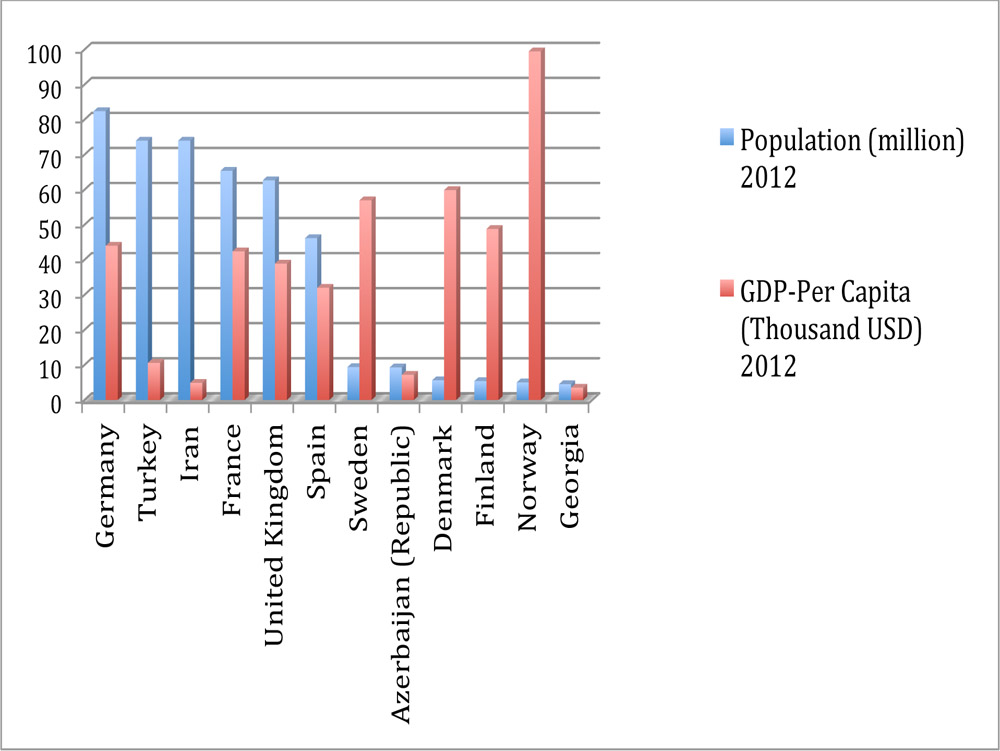 Figure 4: Population and Gross Domestic Product (GDP) of the 11 countries, which mentioned in figure 3 above. Information source: WWW.IRENA.ORG

Furthermore, EU member states propose setting a mandatory target of 20% for renewable energy’s share of energy consumption by 2020. This is a great project to lower costs, consume reliable and non-pollutant energy sources and lower dependency to other countries with rich fossil fuel reserves.

In 2005, the breakdown of renewable energy produced in the EU by source was as follows: 66.1% from biomass, 22.2% from hydropower, 5.5% from wind power, 5.5% from geothermal energy and 0.7% from solar power (thermal and photovoltaic). This statistic clearly shows that biomass is a very useful and convenient clean energy source, which could be found wherever in the world. The second important clean energy source is hydropower, which it is doubtful to be convenient in areas with low precipitation. The third main source is wind, which is very relevant in windy offshore areas. While geothermal energy comes in fourth place, it should be clarified that this energy source is highly recommended in volcanic areas with still warm rocks and geysers. Finally, the fifth clean energy source is solar power (solar-thermal and photovoltaic-PV), which could be developed more effectively in dry and sunny areas (4). I would express each of those main renewable energy sources deliberately and progressively and also investigate the probability of implementation and establishment of clean energy sources in the South Azerbaijan.

South Azerbaijan is a 107,000 Km square- region, which is located in northwestern Iran included East and West Azerbaijan, Ardabil, Hamedan, Zanjan and Qazvin provinces with an enormous ability in the field of renewable energy production. The South Azerbaijan is a half mountainous region with various brooks and rivers, which enrich the area and can enhance potential of the hydroelectric power production. Mountainous structure of this region and due to the effect of the humid climate of the Caspian, Mediterranean and the Black Seas bring more rain there. Moreover, the mean temperature of the region is lower than other mostly warm parts of the central Iran, which is a result of the longer winters.

The biggest and most important cities of Tabriz, Urmia, Ardabil, Hamedan, Zanjan and Qazvin are situated in South Azerbaijan geographical territory. While some areas like the capital city of East Azerbaijan province Tabriz has a unique industry situation, others like Urmia, Ardabil and Hamedan are very famous in agriculture and stockbreeding sectors (5).

Accordance to the last 50 years meteorology measurements, Tabriz Urmia and Ardabil with more than 290, 300 and 270 clear or partly cloudy days per year (6,7,8,9,10,11) and with a mean daily temperature of 12.5 °C, 11.5 °C and 9 °C, respectively, could be attractive to investigate more in solar energy (solar-thermal and photovoltaic). Beside the solar energy, which is the cleanest and most appropriate in South Azerbaijan, wind power could be taken into account as an alternative energy source as well. Despite of the low to medium rates of wind speed in some areas like Ardabil with yearly mean wind speed of 4 m/s (12) and Tabriz with 3.5 m/s (13), more deliberate measurements must be done to make a final decision about implementation of wind turbines. Nevertheless, high mountains and wide steppes surrounding these cities could give a unique opportunity to develop wind power stations.

The third and the most important type of renewable energies globally is hydropower, which is utilized in almost every developing and developed country. In western regions of South Azerbaijan and in Lake Urmia catchment, there are more than 32 dams on 13 rivers that dumping into the Lake Urmia. These dams are causing and contributing Lake Urmia drying in recent years. Because of the critical situation of the salty Lake Urmia and its catastrophic condition, hydropower stations and building dams on rivers specially in that mentioned area is very controversial and needs more time to investigate and research.