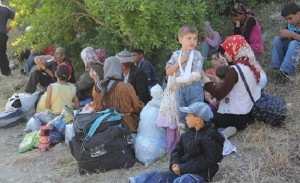 Russian jets continued to bomb rebel positions for a second day in western Syria on Thursday. The bombardment marks a major escalation of the four-year conflict

, where the United States and its coalition of Western allies and regional states have been flying missions for more than a year.

Areas where ethnic Turkmens live in Homs and Hama came under attack on Wednesday, the Turkey-based Syrian Turkmen Assembly said in a statement. In the village of Telbiseh near Homs alone, 40 civilians, including Turkmens, were killed, it said.

The Turkmens, whose Syrian Turkmen Brigades armed wing is allied with the Free Syrian Army, say they have been targeted by both Assad’s forces and Islamic State since the civil war began in 2011.

“We strongly condemn Russia, which was not satisfied with its unlimited support of the murderous regime and now rains down bombs on the Syrian people, promising ‘democracy’,” the statement said.

The Syrian Turkmen Assembly was set up in Gaziantep, Turkey, to unite factions of the Turkish-speaking ethnic group present in Syria and is backed by the Turkish government, which has been an outspoken critic of Syrian President Bashar al-Assad.