Tehran: Workers protest against the Ministry of Cooperation 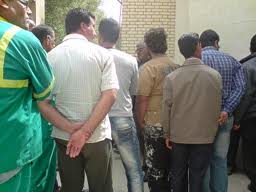 Dedicated to “Oyan News”: almost two thousands of workers protested in front of the “Ministry of labor and Cooperation” in Tehran.

Based on Oyan News’ reporters’ reports, as a result of increasing of economic crisis and closuring of many industrial and economic centers, today 16 february,2013 almost 2000 of labors have protested in front of the ministry of labor and cooperation because of low rate wages or being fired form their works,.

It is important to consider  that the ministry of labor and cooperation is located near the “Azadi” square, therefore it may cause an increase in the number of protesters. Polices and armed forces by creating panic and security condition did not allow reporters to capture and report the protest.